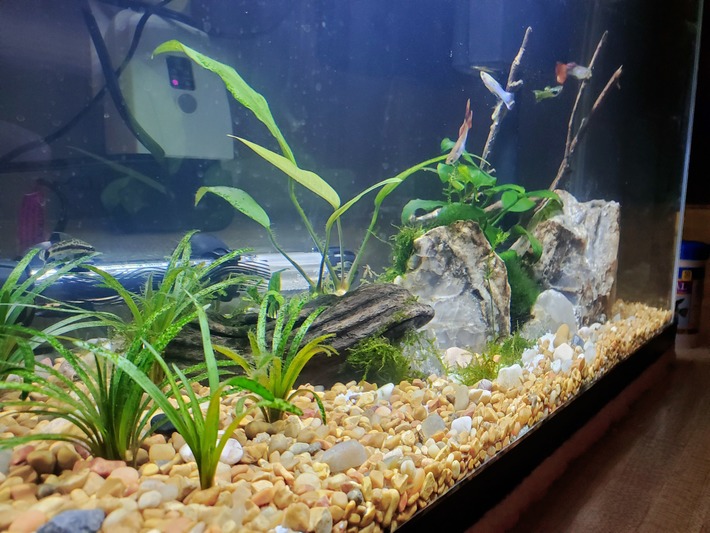 Just added the fish! This is my first planted tank and I went with old Dustin videos and made my own dirt. Hopefully the Christmas moss takes over! 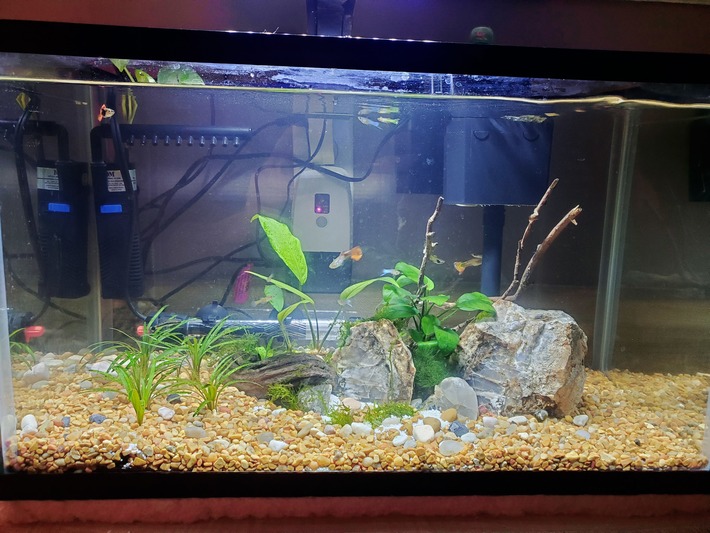 My aquarium is all set up, but not ready to go. My stand needs to be leveled and I’m needing my plants. I’m also going to add more stone after I smash a larger rock. Slowly but surely coming along . I have recently set up a new dirted tank using earthworm castings. The tank has been cycled but I having issues with high nitrates. There are no fish in the tank. Just plants and some snails. I'm wondering if the earthworm castings are leaving something into the water column. Any suggestions are welcome.

Fluval Stratrum Vs. Dirt or other substrates.

I need some help with my 5.5 gallon planted tank.  I've been in the hobby for 11 years but just got into plants. I have Cryps, amazon swords, and anubias.  I want to add more plants like ludwigia and maybe some more cryps. However I want to upgrade my substrate first.  I'm running it low tech.  I have a Finnex Stingray Clip on light, I put H20 root tabs in every 2 months, and I'm dosing half ML of Flourish once a week.  My cryps are growing well, my amazon sword…

Lights how much is enough.

Thinking of possible tank mates for my 3 oscars thwy are in a 350 litre tank was thinking of firemouths and plecos?

Hey what's up everyone? I got myself a 29gal kit awhile back. It's my first tank ever and although the first fish I got have all passed I've had my new community healthy (3 black Molly fry- the spawn of a deceased generation- 4 neon tetras, 2 albino Corys and a retail shark)and thriving for several months (close to a year I think). The thing is... I want to overhaul the tank, that is, convert from gravel and plastic to dirt and live plants.

I just watched Dustin's interview with Robert Steinbeck from aquascaping.Robert,gorgeous plants and beautiful fish! Robert, would you be willing to share your dirt recipe? Sorry if I misspelled your last name.

I have a W120/H60/D60(cm) tank and i want to add bright light needed plants in my aquarium so i have chosen 4 led tube light of 4feet,20watt and 6500k is that enough or i add some more light?What type of light should i use in my tank instead of led tube light and how much should i need.Thanks

Thanks for the add. I'm new to the site. Watch a bunch a vids on youtube and found this site. Right now I have a 10 gallon stocked with artificial plants, sand, heater, aquatech 5-15 gal filter. And it has a betta in it. My son wants to add fish to it. I'm planning on converting it over to a dirted tank first. Just got to get the supplies and do it.

WUFTP... Fastest way to introduce fish a existing tank that just got converted to dirt??

So after a year and a half of killing plants, I decided it's time to upgrade my lighting an dirt my 2 tanks. (I have my 35 now dirted with the fish in a holding tank and my 125 still to change over)
My question is is if do a ton of water changes and use existing filter what's the soonest I can put my fish back in the newly dirted tank?

So back onto my fish obsession! Restarted my 55g with my 10g as a quarantine tank. So I knew that the fish I absolutely need in my FOWLR are marine betta, dwarf lionfish, and snowflake eel. So far, it has been a couple of months with just the Marine Betta in the 55g. I had an antenatta but it didn't make it past a week so I returned it and got a Blue spot puffer instead and the eel is still not eating as of a month by the time I am posting this. With that being said, the coast seems clear…

I dirt my tank two moths ago, I had brackish water for couple of days but it was clear afterwards. Everything went fine for a week and two then I got ich in the tank. I treated the tank after loosing three fish and rest of the fish were quarantined. I am having a huge problem now as my fish are keep dying every second day. I am doing water changes every week. I tested the water everything is 0 but ph is a bit low. My lfs says that dont do big water change its causing ph decrease. I…

Which Miracle Grow Soil do I use??

Ok, so I already bought 2 bags of Organic Choice "Potting mix"Miracle Grow, but on another channel, they are saying that the Miracle grown Organic Choice "Garden Soil" is better!!! They said that it has less ammonia and it doesn't take as long to cycle...

i painted the back and glued the tree together.  The pieces off to the right were actully coming off the back and when i trimmed then to fit in the tank they looked good off to the side.  I am planing of covering the splits with moss.  I also was able to take about and inch and a half off the bottom so now it sits flater and looks a little more real.… I am starting my first planted tank.  I wanted to do something big for the first time and i have been reviewing and watching a ton of videos.  I was out hiking nad found this fallen tree.  It looked alot smaller outside, but i am making it work in the tank.  I am going to paint the back and trim a little off othe bottom so it will sit flate in the tank. …

Hey I was planning of getting two angel fish for my 270litre tank but I am uncertain if they can go with red forest jewels and some of my catfish,
-2 forest jewels
-1 tandanus
-2 salmon/blue tail catfish
-6rainbow fish
-1 clown loach
-Cory cats and bristlenosr catfish
Thanks

Have two salmon tails and other fish in a 70gallon and they where happy the first couple of days I got them but have since just stayed in the same spot only moving to get more comfortable or when being fed HOW CAN I FIX THIS???? please help!!!!