So after lots of research and review, I dirted my first tank about 5 days ago. I used the much recommended Miracle grow organic soil, and about half and inch to an inch of pea gravel to top it. I added fish about 12 hours after planting, and now five days after planting have new growth, and no fish deaths. I will say that soaking the soil for a week+ helped wonders. Currently I am doing daily ~25% water changes just in case of ammonia spikes. Current levels are PH 7.6, ammonia ~.25ppm, nitrites… Continue

Dirted Tank without a rock cap

so I was wondering if anyone has tried a dirt tank with no cap. if so let me know how it works for you.

So all didn't go as planned...far from it. The leaves of the plant wilted after a week and two of the plants died. I managed to salvage one and hacked all the leaves off the rhizome to restart the growth. I figure the wilting occurred because the plants I bought were kept submerged so the leaves couldn't adapt to the changes. Anyway, now the 'bald' rhizome is submerged in water so that the new leaves that grow from it will be able to survive emersed. The wilting might be due to the humidity…

When dirting a tank does anyone ever boil the dirt to get the tannins out of the dirt so you don't have the problem of tannins in your aquarium? Let me know your opinion!

I want to lower maintenance and I am not happy with my current filter can any one recommend a powerful hang-on that would that would be better than the "stock" filter I have. Please post link. NEEDS TO BE QUITE!!

I plan on using 4 t5 54W bulbs with two of them on 8 hours a day then all 4 for 6 hours combined. I will have pressurized co2 for the tank that will kick on 30 min before the lights and 30 min before the lights turn off. I currently have 5 discus about 3.5 inches in size but sadly I may get rid of them due to the demand they have currently. I am going to use eco complete for the substrate mixed with 5mm gravel to allow the plants to have a hold. I will use root tabs every 3 months to help…

Does anyone have any suggestions to help maintain healthy plants. I dont really wanna get into co2 but maybe somewhere down the line. what are best plants for this setup. 125 gal tank, cascade 1500 and an old saltwater sump for 90 gal salt tank, lighting is 2 fluval aquatic and plant 36-46" high light with full spctrum. So much info out there makes my head spin. Please help.

Bought the anubias. Put them in containers with roots submerged in water with a tad of ferts. I am quite happy with this particular plant that I picked up as its ready to flower soon. I split the rhizome into three and tied them to two different blocks of wood and put the containers in a shaded area. They were grown submerged so I might experience some dead leaves but all should go well.

Here are some photos:…

My first dirted tank has been up and running since a couple of days before Christmas. Looking great at the moment. Still need to get the second tank sorted so I can get the platies moved. A few days ago I noticed I have more babies so may be a little while. 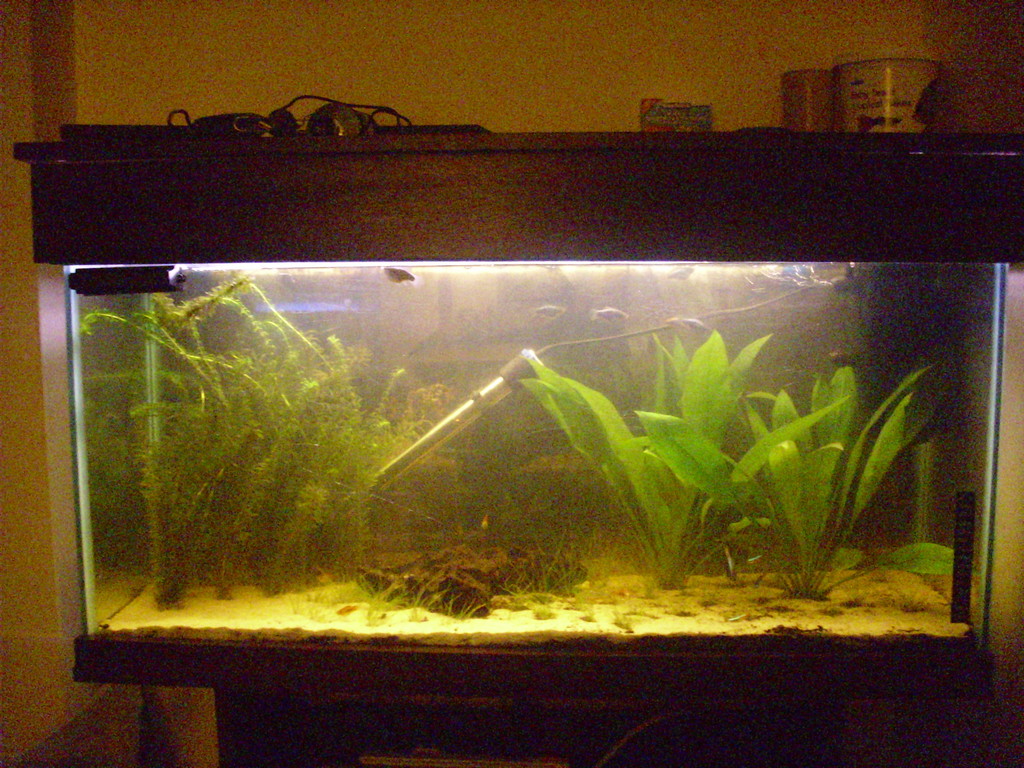 Currently planted with anacaris (until I can find some cabomba here in the UK), amazon…

Well I love rearing fish in aquariums but I also love growing plants. I don't mean just aquatic plants, I like growing terrestrial ones too. I have admittedly had more success with land plants because it is easier to control the conditions and change the conditions to suit optimum plant growth on land than in a relatively small 50 gallon aquarium.

Recently, I read that anubias grows much faster out of water with only its rhizome submerged than it does fully submerged. I would really…

what plants should i get

I run a 2 bulb t5 light on my 55 planted tank. Is that good enough lighting ? Should I switch the blue bulb out for a red or pink bulb or another white? Please any and all opinions are welcome thanks !

I run 2 bulb t5 high outputs with dirt substraight and a diy c02 system, any tips to help carpet/grow successfully??

I finally downloaded all of the pictures on my phone to my computer so now I will actually post them to my page. Big updates to talk about are going to focus on my planted tanks first and finish off with my saltwater experience.

10 gallon planted is overloaded with pond snails so I am working on getting rid of them with lettuce in a bottle I'll let you know how well that works out. My crystal red shrimps that I ordered at my LFS finally came in 4 months later so I threw them into the…

How would you guys treat ich? I think I might have it in one tank but not completely sure.

The Importance of Plants in your Aquarium

Just thought I'd share another one of my observations in the relatively brief time that I have been in this hobby, a mere 2 years. The fact that I have been able to observe this and appreciate the difference that plants make in an aquarium is evidence enough of how important they are.

I have a 50 gallon South American aquarium with a variety of tetras, catfish and 2 angelfish. In the time that I have had this tank, I have kept fish in it with plants and without…

So I am very late on this blog post, but I have a bunch of updates!!! First off I am selling back my Cory's because they are just not the right fish for a planted tank no matter how hard I try! Second off I have been toying with the idea of discus, but I think I will wait for my plants to grow in a lot more! Speaking of planted tanks my 10g definitely has pond snails so I need to fix that and quick! I bought plastic to make my own personal tops to my aquariums to try to reduce evaporation…