So I have been looking through all the pics and videos of everybody’s nice planted dirt tanks for a while and figured it was time to give it a try.  I would like to lay it out here and possibly have you guys let me know if what I did was ok and how I could maybe improve, and propose a few questions.

I decided to experiment first with a small 10 gallon.  As it turns out my 4 year old has been wanting one so this was a perfect opportunity to set up my daughters first fish tank. 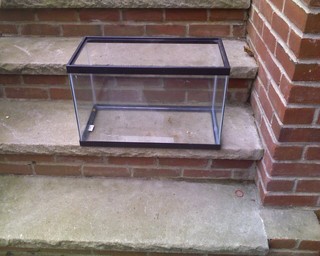 For the dirt I went with the miracle grow organic potting soil I saw most frequently used in the videos.  I put some in a buckets and added some water and let sit for a while to let most of the large woodier pieces float up. 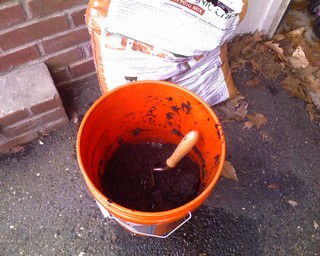 I couldn’t find the clay at the store so I improvised by smashing up a small terracotta pot to a variety of particle sizes.  I mixed that in the surface of the dirt along with some crushed coral. After I put the cap layer of gravel on along with a nice rock and a small piece of wood I did a few fill and rinses.  I did it a least 3 times at first.  After that I put a few plants in and did one more fill and empty before it went into its final spot.  Once in place I did one more final ~25% water change.

Currently I have been through 2 of my old filters to find one quiet enough to be in her bedroom.  After spending 17 bucks for a new impeller for my old aquaclear 70 (probably 2 big anyway) I ended up returning that part and just getting a new nice and quiet Aquaclear 50.  I have a 15W 18 inch Life-Glo bulb on it for 10Hrs a day.  I also just added some aeration in the form of a flexible bubble wand and a heater.  I have been running it for about a week and it is crystal clear no fish yet.

How much aeration is needed? Most of the little pumps I have still sound kind of annoying when you try and sleep?  Can the air be put on the timer as well and only run during the day?

Whats an ideal temp for a small planted tank like this?

What are some nice small fish that would like to be in this kind of environment, also would like some small invertebrates.

Here is the big one, Has anyone had any success dirting and planting a tall 35gal hexagon tank?  Its like 24-28inches deep and the hoop only has a 18inch single bulb florescent on it (see pic).  I would really like (depending how this 10 gal goes) try this out eventually on this tank.

Thanks for any comments and tips

I added a little crushed coral to slowly introduce some calcium bicarbonate in order to increase the buffering capacity of the water.  I figured with such a small tank a slightly high pH would be better then the potential for large swings in pH.  I could be wrong tho.

1. I don't think that much aeration is necessary, I've seen Dustin usually running a small to medium sized airstone in most of his tanks. Some people like to run the air at night only and I have never had a pump that was quiet, they all have that low humming sound

3. In a 10 Gal. there are many options for fish but I think a small school of neon tetra wold look nice

Keep it simple. Go with the 35 hex.  The bigger the tank the more stable. Nix the crushed coral. The soil is fine. Cap it with gravel to avoid the mess. You'll need to do frequent water changes; so your ph will be whatever your tap water is. If the temp in your 4yr old's room is stable (I hope) and between 70-80 nix the heater too. The filter will provide enuf water movement - just don't overload it with fish - its not natural. The light is fine.

you should get some shirp, like cherry shrimp so they will 'pop' against the rock and the redish plants! Also they dont need to be heated ( so heat wont be to big of an issue) and they help to clean the alge off of the leaves keeping them fresh and healthy! And as for fish, maybe some black skert teteras or if you wanted a kind of 'Red theme' some serpae tetras to match your shrimp. When there well kept they become a viberant red with white fins and are extremly chill. Otherwise I allways say theres nothing wrong with some zerbra dannios. The most indestrucible, yet very sheek, fish on the planet!!

I did similar thing with my 25 gal tank. (you could see my youtube channel) I also could not find any clay in the store so I did the same thing you did. (I hope my mom will not kill me when she finds out that I broke one of here pots) Even though I see the point of you punting some shelves in aquarium I did not do that since my top water is already high in PH.

update on the tank 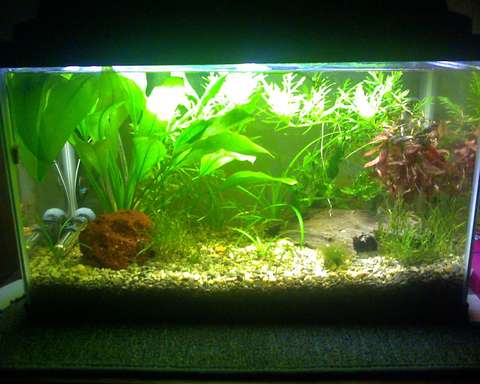 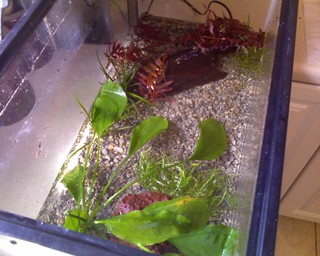 Day 682 after trimming some plants