How I replaced my pea gravel with plant substrate.

I looked at what the problem was in my tank, and researched how I could fix it. In my case it was the pea gravel not holding the dirt, making the  water column yellow in color and leaving a brown sludge on the glass and leaves of the tank.

I only had three solutions, the first was to go buy more pea gravel which, would most likely not match the original gravel. The second was to do crap-loads of water changes weekly and clean the plants and glass every other day, and the third option was to tear out the old gravel and put gravel in. I as you can tell by the title of the blog post, I did the third option.

I researched and asked around (mostly on chat) which gravel would be the best option and I mostly received the answer Fourite. (There were many others answers such as Eco Complete, and pool filter sand.) So I went in the search of Flourite. I was able to find some in a PetSmart. (*note I did not buy the substrate the day I found it)

Now that I found the substrate I planned how I was going to do it. I had a 10 gallon tank where I could put my fish while I dug up the old gravel. I planned to have an air pump and a filter running on the 10 gallon while the fish waited.

The next weekend I went back to the store to buy the Flourite, as it turns out they only have one bag and I needed at least two bag, so I looked around and found some Flora Max, I bought one bag each and brought it home. From the people I talked to, most of them said that the Flourite was going to be dusty and was going to be rinsed a lot and I was okay with that. I started with the Flora Max and had no problems, it too four rinses to clean and I though how much worse could the flourite be. It ended up tanking 9 rinses to clean the bag of flourite, and it still wasn't as clan as the Flora Max. Video!!!

The next morning I started to work on the tank, I started by laying out towels and finding all supplies  needed. Next, I took about the plants that were going to get in the way of me catching the fish (Wisteria and Hornwort). All went smoothly except the last few fish as always. As it turns out YoYo Loaches will dig into the gravel of your tank when your trying to catch them, so as you can imagine, it took awhile to find them. Then, I removed the rest of the plants and water.

Step six consisted of me digging up the gravel and some of the dirt. Lets just say it smelled a little funky for awhile. I then pushed the remaining dirt away from the front and sides of the tank and filled it in with the mixture of Flourite and Flora Max so you couldn't see the dirt through the glass. I then layed a thin layer of the old pea gravel as a planting guild. I placed the rest of the substrate in with a incline to the back of the tank. 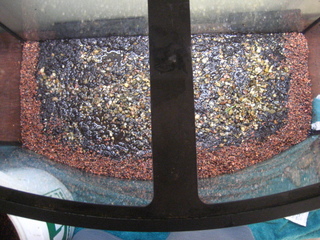 Time to replant the plants... I used a squirt bottle to keep the plants wet. Filling the tank up with water, I used a heavy plate to pour the water on instide of just pouring it on the gravel where the gravel would get disturbed and make a mess. Mine was very cloudy at first and after filling it to 75% I took about 25% out, then filled it full.

Adding bacteria and Bio-Magnet Clarifier. The Clarifier came with the Flora Max, and helps remove the cloudyness in the water and the bacteria helps start new colonies of bacteria faster than cycling a tank.

Return the fish to the tank.