Precisely why Obagi Products are the most.

Do you know the greatest things about using the Obagi NuDerm type of skin care products? Effectively, the leading advantage is you acquire beautiful, simple, younger looking skin area.

In case you suffer from severe excitable pigmentation, sunlight & age attractions, etc . in addition to tried out a range of some other skin care ointments and have observed little outcomes, then you certainly owe it to you to ultimately attempt Obaji. 95% of people who follow their skin care regimen… Continue

Hey Fishtank people , im new to the planted tank world and also very new to this site but im in use of some help here. I defiantly want to make a DIY co2 system but id like to learn how or what is the best way to do it , well the paintball version or even if it is necessary for me to do it or beneficial just looking for someone to kinda fill me in on all this, Thanks. Will my glosso survive?

Just got and planted some new glossostigma. The problem is it came very pale. It is not mushy, but it just looks pale and slightly chlorotic...
I have high light and DIY co2 + flourish excell.
Do you think these plants will survive?

I finally lost my mind

I finally lost my mind and did it. I jumped right in and did a dirted 75g tank.

It was a lot of work getting it set up but it's so worth it. I am currently on Day seven of the new tank.

After set up I filled the tank it looked great water clear. The second day water was real cloudy and dark. I let that go until day 3. On day three my plant order arrived and I drained the tank and planted it and refilled.

Think you know a lot about South American cichlids?  "We don't even know what we don't know" says Jim Carmark one of the world's true experts. Here's a fascinating interview centered around his collecting trips with the New England Aquarium. …

Can you use BBQ lava rock in the aquarium with rcs?

From time to time, checks are conducted concerning which with the available video games are the best among the rest. On this page, the debate is about the ranking on the video games according to sales that is certainly reasonable enough since the sport with the maximum sales is most likely the very best. Normally, investment decision you won't become patronized by the particular gamers on their own. Halfway with the season 2013, often the NPD Group released its ranks while using revenue… Continue

Hey so i got my 30 gal tank setup with dirt and all and didnt know bab tears needed to much light (2wpg )i was running a little less than one. so they are starting to turn brown so i moved them outside in a small container with dirt.

So my question is what led light would i need to get a nice carpet of baby tears? or what cheap fixture can i get

The start of my endoverors!

Getting all planed out was hard but these forums are what made it possible! Thank you all who have posted. I'm starting out with my 10 gallon that will have florite and be planted. Probably going to just do neon tetras... I got my hands in a 55 gallon and want to try my hand at planting with my 10. So thank you all and I will be updating with my progress and questions!

Just posted My Photos From The Aquarium, Check Em Out

All fish are from The Vancouver Aquarium. So as the title says everything in the tank has grown about an inch, but its starting to clear up now and the plants all seem to be getting brighter and brighter green(which is cool) and the ludwigia repens is growing the most right now so ya i moved some plants around too, tell me what you think.…

Hey i just dirted my tank first time and want to know if i can get away with growing baby tears with only 1,5 wpg right now i have a dry start cover in plastic wrap
I was also wondering if i should wait for the baby tears to get some roots before i cap it because when i bought them (2) their roots were vary small im scared to cap it cuz the roots arent long enough to reach the soil and idk if its safe please help

Hi guys, some questions.
Dirt has been an interest of mine and I want to know if it's really worth the trouble?
I know that you can go buy the correct dirt for about a million dollars a pound but are there any cheep alternatives?
And any tips on prepping for dirt?

I have one pair of Bolivian rams in my 36 gallon planted amazon tank along with some Corey cats and some cherry barbs and I was wondering if I would be able to add a pair of Cacatuoides in the tank. I plan on turning the tank into a high tech heavily planted tank so there will be plenty of cover I also have some small flower pots set up as caves. So, will this work? any advice and feedback is very appreciated.

Day 1 of Dirt Tank How does it look? 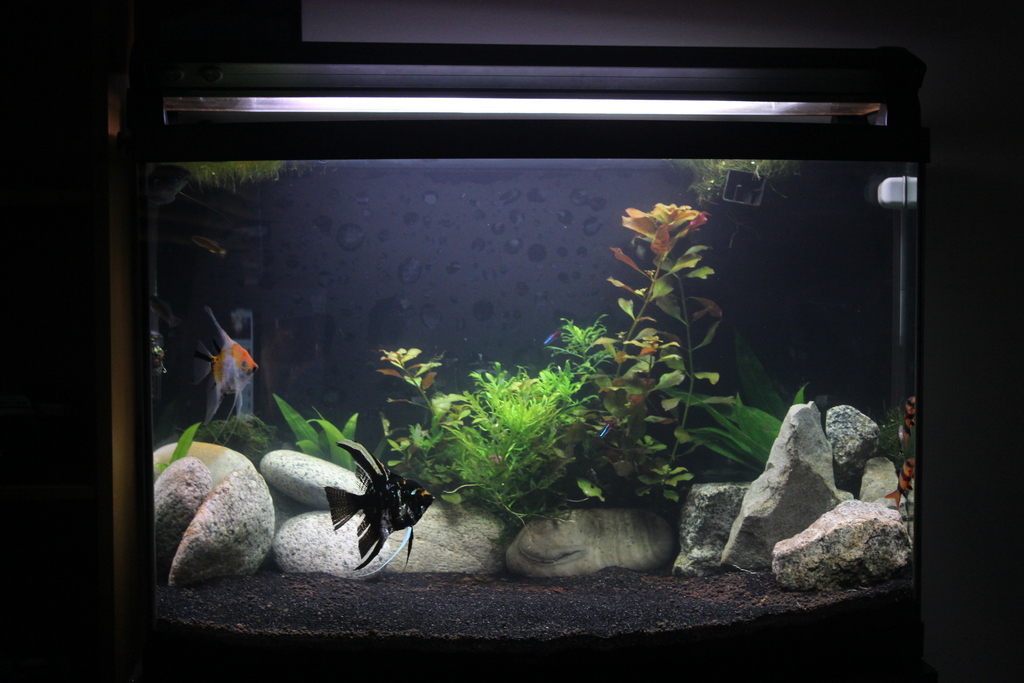 The bubbles is cuz i was being lazy and forgot to wipe the background. so apart from that how is it?

Year and a half later.

Well the fish and the shrimp are doing great. The plants also, need trimming regularly. The chia Pet not so great I wasn't able to get anything to take root on it so gave up and put in a piece of driftwood instead.

Converting to dirt but have questions

so im going to convert to dirt and i was wondering because some people complain that u cant use sand but im going to do that anyway cuz i have sand and fluval stratum mixed (should be fine) any way what should i look for when doing it and how should i go about getting all the stuff out of my tank to redo it thx.

It doesn't get any better than this.

What to do with Flame Moss

so i have 2 giant clumps of flame moss healthy and idk what to do with it, anyone have any experience growing it?