BBA, and co2 and lighting

hello all, I am pretty new here and have been reading a lot of post on bba. I have a 125 gallon tank with eco complete, i have two quad t5ho lights(312watts total). the plants i have are myrios, a couple of swords, three ulvaceus, 4 tiger lotus plants. According to the watts per gallon rule i have 2.5. i also have co2 injection. i do a 50% water change weekly and i also use dry ferts from greenleaf. I was adding ferts daily according to the die schedule but i was getting way to much algae.…

This is my current setup. been up and running for 4 months.

whats the best dirt to use?

setting up a 55 gallon tank

I am setting up a 55 gallon fish tank and would like to what is the best filter and quiestest pump to go with.

It Never Gets Old

No matter how many times I've seen it, the birth of fry never gets old.
No matter how many new blooms I see on my plants, it never gets old. Each new plant life, each new fry is met with the same joy as the last, the one before that and the one before that.
Beautiful bright scales, mating dances, even when they establish rank, I enjoy watching it.
I've seen my Bettas pass through Wisteria roots a thousand times, each time as beautiful as the first.
I search for the perfect…

A quick tank update. All my fish are doing great after I got rid of the worms. My jungle val is growing out of control so I had to cut a lot of it back. I stopped using DIY CO2 and going to switch to Seachem Excel.

Now for my real question. I've had some Blue Rams for a few weeks now. They're eating great and swimming up to the front of the tank often. I can usually find them with my red phantom tetras or the keyhole cichlids. However, their colours aren't as bright as when we bought…

WHAT UP!!! excited bout this plant order

Got a call from Dustin bout my order gettng jungle val, sag, and swords, i am one happy camper cant wait to get into the tank in a few days and just go nuts

I started with red honey gourami, 3, as my larger feature fish in the 30 gal, but they have all been sickly and faded,  when everyone else is doing great (and from different stores).    So I'm looking for something different to add to the tank.

Looking for something between the 2-3" range,…

I NEED TO STOCK MY TANK!

OK. so I ordered an ADA 60p tank like 2 weeks ago, and It's coming this week. It's 17.5 gallons, 66 liters. I am super excited but right now, in my 5 gal tank, i have 12 neons, 1 betta, 1 ghost shrimp, 4 cory cats. In my new tank though I can have SOOO many more fish. So im not really intersted in anything too big. Betta size is the beggest ill go for.. I  was thinking about these: baloon pristella, scarlet bandis, siamese algae eater, otocinclus, amano shrimp, sakura…

So i want to get some new fish. Either some more oto cats, or some cory cats. Or basically anything that will help my cleanup crew. My Tank is almost balanced!!!!!! # weeks and no algae, so exiting. Im kinda hesitant with cory's because the last time i had them they tried uprooting plants..... do they all do this?

the tanks are now planted

The tanks are now planted with moss balls ,java fern and a few others.

So just yesterday i was feeding my fish and i noticed a couple little tiny pieces of duckweed (which i dident buy) most likely it came with my hornwort plant. the question i have not is keep it or kill it before it becomes a problem..... 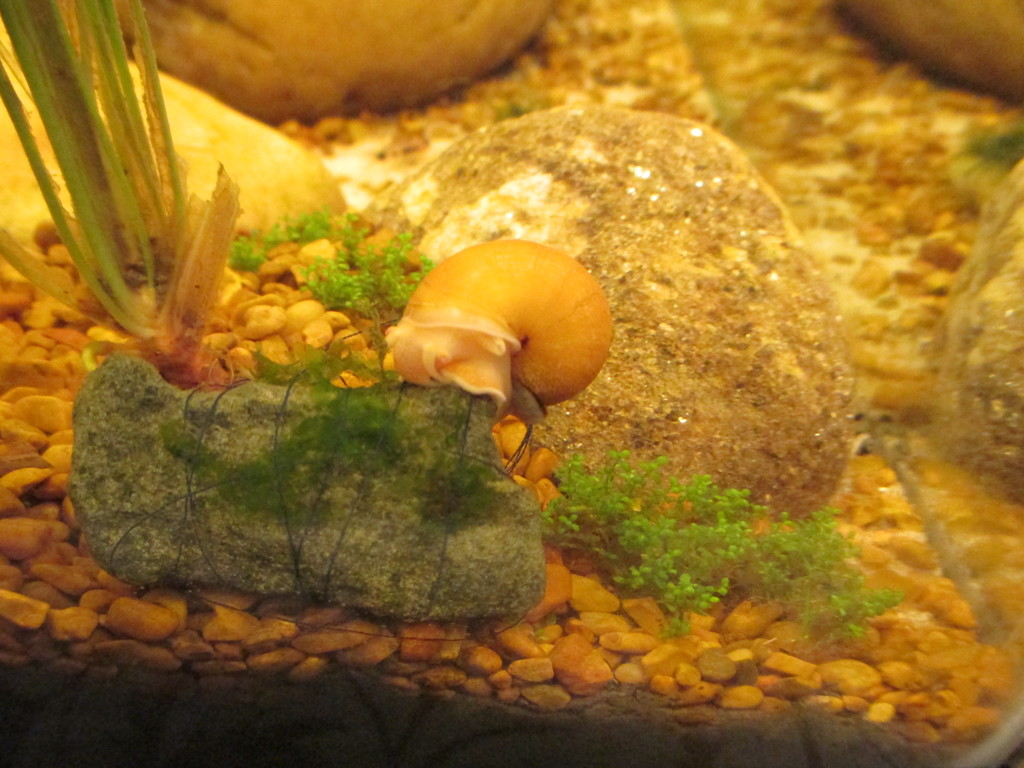 I put an apple snail in my 10 gallon last Sunday, and I can't believe what a great job he's done.   The glass and rocks are spotless,  even the rocks with bits of starter plants tied to them.   He cleaned all around and over them without touching the healthy green stuff.   Now he's started on the plants, going up and down each one, and they seem to appreciate having…

Tank Update + Snails or no Snails ?

Right so the Tank is doing well all water reading are coming back well and the water is clear so so far so good  fingers crossed !, I recently bought some red cherry shrimp to help out with algae and because they are awsome little things and jsut look great , especially when contrasted against the dark wood in my tank. I Also bought some Moss balls for them although they dont look the most natural in my tank I think there good and the shrimp will enjoy them.…

subscribe to my you tube fish channel just fisheys !!!

I'm moving March 1st and I need suggestions on how to move a host of fish. This is what has to be moved.

I think of this move and I'm like, Oh dear how on earth am I going to move all these fish? I figure the frogs will be just fine and the bettas will manage in their…

How would you guys and girls aquascape a rectangular 5.5?it has black and very little white rocks so its pretty empty .so how would you aquascap it? And thank you in advance