my ten gallon tank is suffering nitrate and nitrite problems the girl at petsmart said the reason is because i have cichlids in there i have 2 and one is very sick but the other one is fine what can i do and what should i do with this sick fish flush him or what ???

Hey what's up guys I need help on stocking my new tank and I would like to know if u think these fish are appropriate for the size of the tank :) so here's what I was thinking 6-10 neons or 6-8 rummynose Tetra or even 6-8 harlequin rasbora , a pair of bolivian rams 4 otocinclus catfish and a 4-8 cory cats (sterbai or panda) sooo please tell me what fish you personally recommend thanks

My arowana is getting big on my 80gal aquarium

He was just a fry when I bought. Him and now he is 6inch long

Huge Update on Fresh and Saltwater!

So it has been a while since I have taken some time out to really brag about my progress. Not that there is much since I barely have time to feed the fish lately.

10 gallon planted tank is overrun by pond snails and looks like complete shit! I only see 2 white clouds left and 4 zebra danios. The good news, the shrimp are spawning like crazy! That is something I can sell back for some profit once the get to a decent size. I have been dying to tear this tank down and get a 30 gallon…

Its That Time Of The Month Again...;)

Sitting in front of my fish tanks after a hectic week of work and activities...can't get any more relaxing than this. However, the feeling of relaxation only lasts a while before being overtaken by a burning passion and desire to revamp my fish tanks. Let me explain, for a few weeks now I have wanted to aquascape my 50 gallon tank but I have had to wait for the plants to grow a bit taller and bigger. Well, now everythings rollin and growing like crazy and I just have to go down to the lfs to…

I have noticed some big bubbles coming from my substrate recently it isn't that often but when they do come up it is in a group of like 4-7. I have had the tank up and running now for 2 months and it is a heavily planted tank. My plants are growing like crazy so I don't think the gas is bad but I even took plants that I couldn't get growing in my other tank into this one with crazy good results. Just give me some input thanks

i have a auratas cichlid ( yellow) and a acei cichlid , the acei is very nice but the auratas is mean and i was wondering what i can put with these guys could i do a red tailed shark or german blue rams or a pair of marble angels any advice would help thanks . 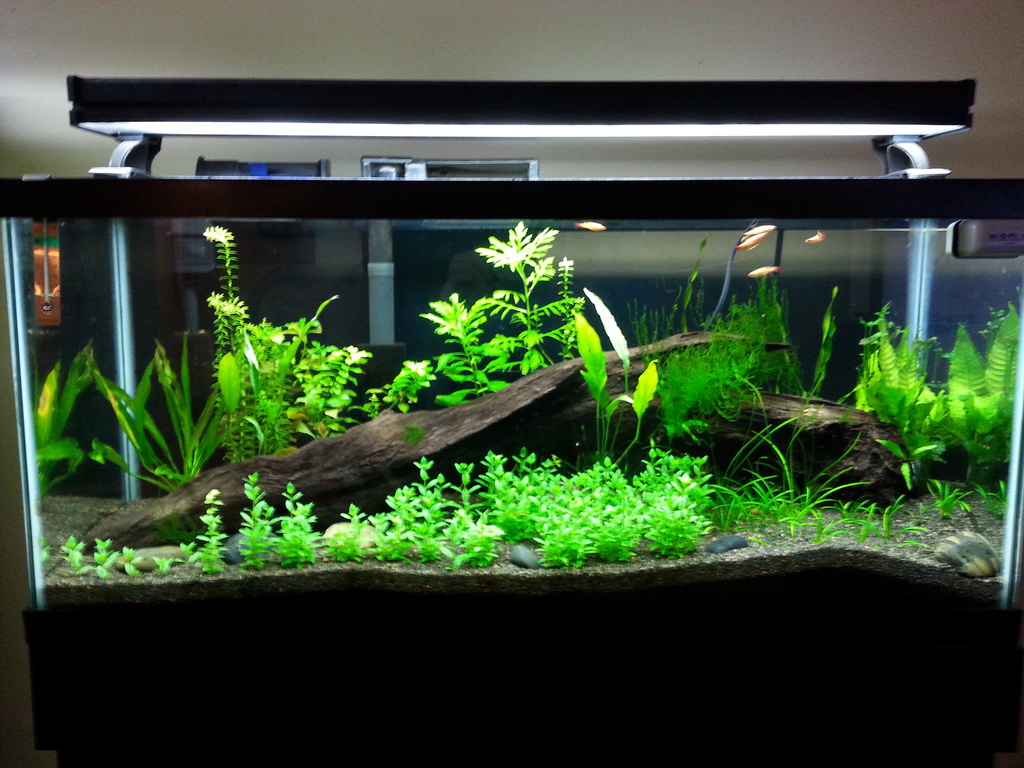 Got a new 29g setup with live plants. Ready for fish. Any suggestions on what fish I should start with?

I have five otocinclus catfish in a ten gallon heavily planted tank. Two are females and three are males. Both females are about to lay eggs (i can see them in they're "bellies") and was wondering if any of you guys have ever had this happen before. I know it's very rare. I noticed the eggs in they're "bellies" while I was treating ich and my temp has been at 86 the past week and a half and I'm about to stop treating. When treating is over I'll move all the other fish to a twenty gallon and… Continue

can i put a auratas cichlid with two german blur rams

HELP. What is this

I have little tiny white worm looking things all over my aquarium glass I don't know what they are. Snail fry maybe. I never had them until I started having pond snails in my tank. They are extremely small and hard to see unless you kind if focus but there are like thousands of these guys. I don't know how to add pictures or I would

Corel I got from ocean

While in the Caribbean I picked up a couple pieces of coral and was thinking what do I have to do to them before I put them in my tank.  Anyone know if I can do this?  Thanks.

Guys.. been a bit. Tanking on.. starting a new tank. Old tank still busten out

Guys.. been a bit. Tanking on.. starting a new tank. Old tank still busten out Continue

Stocking a 29 gal planted tank! Looking for out of the box schooling fish and also a pair of something as a center piece! Surprise me!

Update on the 40 planted

2 weeks in and cycled, water is super clear and plants are showing lots of growth. All parameters are normal. Fish seem really happy. I don't like how I set up the plants at this point but I think its a little late to change anything. I will just have to live with it until I move. I planed the planting before I did it but didn't know a lot about the plants that I got because it was a package so... next time. I should have more  plants by the time I replant, I guess I will just have to do the…

Hey guys I was wondering what u guys's top three fish forums were. It can be fresh or saltwater and I also wanna know why they're your top three; are the people friendly, helpfull, know what they're talkin about? Or whatever else you like about them. I wanna know you guys's top three. As always thanks guys.